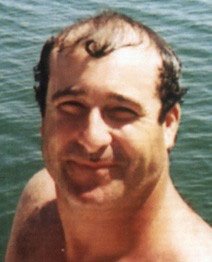 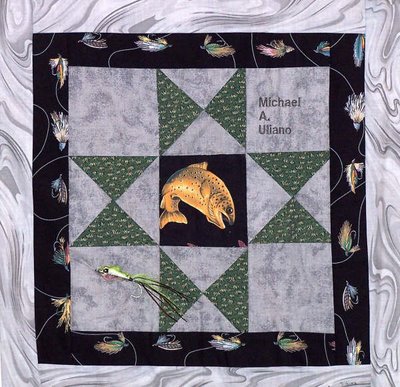 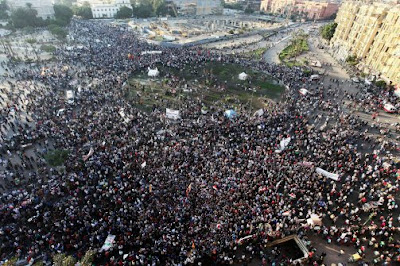 Four years ago Obama went to Cairo to give a speech that he hoped would begin a new relationship between America and the Muslim world.  In the first paragraph he tells the audience “Assalaamu alaykum”, peace be upon you.  Two years later a shocked Israel would see Obama, in the words of columnist Aviad Pohoryles of the daily Maariv, put “A Bullet in the Back” of longtime ally Hosni Mubarak.  Israelis accused Obama and Secretary of State Hillary Clinton of pursuing a naive and narrow minded diplomacy without any regard to the dangers to the rest of the Middle East.  Apparently they were right.

I’m not sure what they thought the outcome would be but most people with any knowledge of the region figured radical Islamists would fill the vacuum.  The Muslim Brotherhood jumped in with both feet, put one of theirs in the Presidency, and wrote a theocratic constitution.  Since then Egypt has had anything but the peace Obama hoped to inspire.  Just as in Libya Egypt is on a downward spiral into anarchy because a clueless administration pursued rainbows and unicorns.  Since Mubarak’s ouster tourism, once 11.3% of GDP, has declined 40%.  Inflation is at 8.2% and is expected to hit double digits this summer.  Hardest hit are food prices because Egypt relies mainly on food imports and therefore prices are dependent on the exchange rate.  Despite spending half of its dollar reserves to prop up its currency the Egyptian pound has lost a third of its value.  Economic growth has gone from 5.1% under Mubarak to 1.8%.  Egypt's bond rating has been lowered to 'junk' or 'near-junk' status.  Coptic Christians are being persecuted and many are leaving.  This exodus of what are mainly middle class professionals is further exasperating an already dismal economic situation. 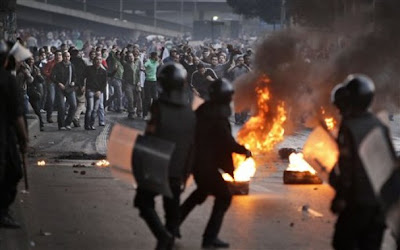 Assalaamu alaykum.
Posted by Rancher at Wednesday, July 03, 2013 No comments:

The White House has graciously offered to give Mitt Romney a pass on five years of tax returns; they will accept the the release of five previous years returns instead of ten and promise to drop the issue after that.  The Obama campaign's MO, ( Modus operandi, Method of Operation), is to "pry into the private records of his opponents" and pick through, distort and lie about what's in them.  Allen West's Face Book response is “Show us your sealed college records and Operation Fast and Furious White House memos, and we will all show you our tax returns.”

Forget everything else, let congress see the Fast and Furious documents.  No one died in relation to Romney's tax returns.
Posted by Rancher at Monday, August 20, 2012 No comments:


The left's response?  Media matters calls them gutless.The Nation calls it Swiftboating.  I call it patriotism and looking out for their brothers in arms who may still pay the ultimate price for Obama's loose lips.
Posted by Rancher at Thursday, August 16, 2012 No comments:

There is now no check on the power of the federal government.  Obamacare can be repealed but the precedent is now set, the government can mandate anything as long as they make the penalty a tax.

“The federal government, yes, can do most anything in this country.”

Turns out Rep. Fortney “Pete” Stark (D-Calif.) was right when he made the statement above.  Roberts is either out of his mind or the Chicago gang was able to get to him somehow.  Hope you all like Broccoli. 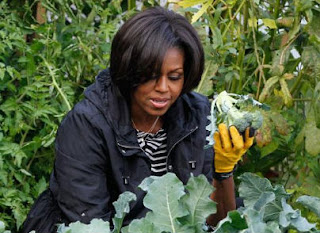 "It warn't the grounding -- that didn't keep us back but a little. We blowed out a cylinder-head."
"Good gracious! anybody hurt?"
"No's. Killed a nigger."
"Well, it's lucky; because sometimes people do get hurt."


That passage written by Mark Twain highlighted the attitude of southern Whites towards Blacks in antebellum America.  One would think we've come a long way since then but the attitude of Democrats toward the Fast and Furious scandal seems to suggest otherwise.  Was anybody hurt by the Justice Department program where guns were sold to drug cartels and allowed to be taken into Mexico?  No, just some Mexicans.  Some 300 of them.  Oh, and a couple of cops.  No big deal, we can't understand why Republicans are so outraged by this, must be politics.  No, it must be racism, that's it, the Republicans are so outraged by the deaths of a couple hundred Mexicans facilitated by our top law enforcement agency because they are racists.  After all, it's just some Mexicans. 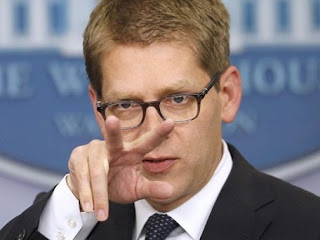 These are not the documents you are looking for, move along...

The problem of gun walking was a field-driven tactic that dated back to the previous administration, and it was this administration’s attorney general who ended it.

So said White House mouthpiece Jay Carney at a press hearing shortly after Obama invoked executive privilege in a last ditch effort to cover up lord knows what.  Carney should know better than to tell such a blatant lie so soon after Holder had to recant his testimony for pretty much saying the same thing.  Bush stopped Operation Wide Receiver as soon as some guns were lost.  There are many differences between Operation Wide Receiver and Fast and Furious.  The biggest difference is the fact that Wide Receiver tried very hard to keep track of the guns so they could actually get some intel from the operation and arrest the gunrunners.  The guns had tracking devices and the Mexican authorities were included in the operation.  Holder's guns did not and Mexico was kept entirely in the dark about Fast and Furious.  Wide Receiver  failed and guns made it into Mexico because while they were tracked by U.S. officials to the border and Mexican officials were notified as to where and when they would cross the Mexican police didn't manage to capture and arrest the gunrunners, (go figure).  The program was shut down October 6, 2007.


Given the failure of that operation, which was limited to about 650 guns run out of ATF's Phoenix office, one wonders why Holder's ATF would try it again.  One wonders why they would massively expand the operation to include several cities and thousands of guns.  One really has to wonder why no effort at all was made to keep track of the weapons and while it made sense to not include the Mexican police again why weren't American agents working  in Mexico involved?  You can only conclude that they wanted to flood Mexico with weapons that could be traced to the United States after they were used in violent drug crimes.  That way they could prove the meme that had previously proved to be a lie that 90% of guns used in crimes in Mexico come from the United States.

That should outrage everyone.  In order to push a political agenda, greater gun control, the United States was willing to arm violent criminals and sacrifice hundreds of Mexican citizens.  Doesn't that make us sponsors of terrorists?  But hey, they're just Mexicans. 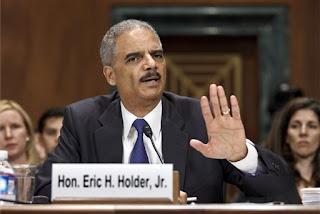 In just the fourth time in 30 years Congress will vote on whether to hold an executive branch member in contempt of Congress.  Attorney General Eric Holder has refused to turn over tens of thousands of pages of documents on operation Fast and Furious including materials created after the Justice Department wrote a letter to Congress saying no gunwalking had occurred.  Holder also claimed during congressional testimony that internal Justice Department emails that used the phrase “Fast and Furious” do not refer to operation Fast and Furious.  So you can understand why Republicans are dubious that Holder will get to the bottom of the White House national security leaks, or if he does they doubt he will share that knowledge with Congress.  It's been over a year and a half since Border Agent Brian Terry was gunned down by drug cartel members whose AK-47s were supplied by the Justice Department and the family still doesn't have any answers as to how and why this could happen.  The hundreds of Mexican citizens also killed with thousands of Justice Department supplied weapons have no answers.  No one has been fired, no one has been held accountable. 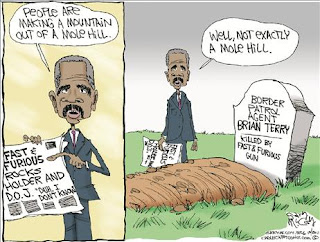 We really don't need to dig very deep to find out who leaked the information about the kill list and Stuxnet.  Obama finds it "very offensive" that anyone would suggest that the leaks come from his White House but the New York Times who wrote those stories actually say it was the White House that supplied the leaks.  From the kill list article:


In interviews with The New York Times, three dozen of his current and former advisers described Mr. Obama’s evolution since taking on the role, without precedent in presidential history, of personally overseeing the shadow war with Al Qaeda.


'Should we shut this thing down?’ Mr. Obama asked, according to members of the president's national security team who were in the room. 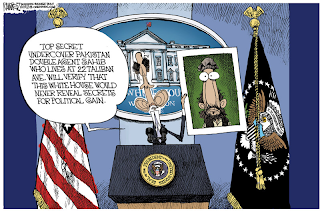 Obama is waging a war on whistle blowers while leaking national security secrets.  At the very same time he's telling federal courts that these programs are so secret that they can't even be confirmed much less disclosed or judicially reviewed.  Condemning water boarding while maintaining a kill list. Scuttlebutt says Leon Panetta actually told the White House to "Shut the fuck up" after disclosures about the raid that killed Osama.  The idea that Stonewall Holder will out the leakers much less prosecute them is as ludicrous as thinking Obama would put the nation's interests and peoples lives ahead of a few minutes of favorable press. 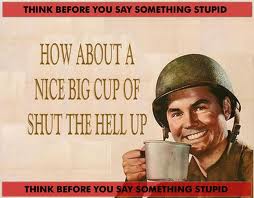