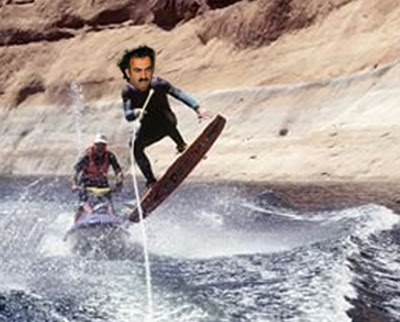 Water Boarding Khalid Sheikh Mohammed
According to the ACLU I have been tortured. According to the Dems my son has been tortured. All this torture going on and we aren’t even terrorist. If we were terrorists we would not be tortured by any of the Dem candidates for President even though we might have knowledge that could save millions of lives. The Dems, (and McCain), will sacrifice a good number of us to keep some vague moral high ground.

Most Americans don’t want Gestapo tactics used on terrorists and certainly not on our own citizens. Yet the things we are discussing, in my case electronic restraints that I had to “experience” as part of my Correctional Officer training and water boarding that my son underwent as part of his S.E.R.E. Training are not torture.

S.E.R.E means Survival, Evasion, Resistance & Escape. Uncle Jimbo at Black Five explains the course here. Long Time Standing, The Cold Cell, and Water Boarding are all used against the trainees. If we can subject our military to such horrors just why in the hell should such techniques not be used against the monsters trying to kill our children? Jimbo sums it up for me;

The human will is strong, but it can be broken without having to break the mind or body, you just confuse and degrade it, and play mind games with it's owner until finally the ability to resist is gone. That is the whole point of coercive interrogation, breaking the human will to resist which is an artificial construct of each individual. Find their weakest area, exploit and overload the brain and body and eventually the brain will overrule the will and survival instinct will cause cooperation to make it stop.

Bottom line is coercive interrogation techniques are proper and should be employed and the line drawn at causing permanent damage to the mind or body. Temporary suffering, degradation, humiliation and even distress are acceptable to me and I believe we should formally state that these are approved for high value prisoners. I also think we should hint that we might even do worse, in a nudge, nudge, wink , wink kinda' way to increase their effectiveness, while stating for the cameras that "The US never sanctions the use of torture".

The fact the Dems will obstruct another Bush nomination, in this case for Attorney General, because he won’t take a position on water boarding reveals two things. One, they will oppose Bush no matter what with every breath they take regardless of the consequences to their party or their nation. Two, if allowed they will get rid of the so called torture, the Patriot Act, the listening in on terrorists conversations, and the many other actions we have taken to prevent another 9/11. As for myself, if I felt it was necessary to get info from any criminal, terrorist or otherwise, that might save my loved ones from a horrible death, give me a pair of pliers, some chicken wire, a candle, and some salt, and I will do what must be done and damn the law.

BTW: A CIA source told The New York Times that water boarding has been used a sum total of three times.

Your finally paragraph is the ringing truth...they hate Bush more than they hate those who wish us harm.

I will be totally honest, use whatever method necessary to save the lives of Americans are my thoughts.
Jennifer

Why Jen, you heartless monster.

Yep...compacted into a 5'short frame that says NO MORE!!!

The moral high ground pose (and it is truly only a pose) must be be maintained at all times. Therefore waterboarding and imposed discomfort of any kind are torture. Character assassination of known conservatives, however, is classified as a public service.